"CPI's business remains healthy in a somewhat challenging environment. Despite the expected decrease in sales and profit levels from last year's exceptionally strong results, we continue to see decent fundamental demand for CPI's products, as evidenced by our favorable year-to-date book-to-bill ratio of 1.02. Additionally, we continue to generate positive cash flow from operating activities and have increased our cash balance this fiscal year," said Joe Caldarelli, chief executive officer.

In the first nine months of fiscal 2015, CPI booked total orders of $336 million, a one percent increase from the $334 million booked in the same period of fiscal 2014. Orders increased in the communications market, were unchanged in the medical market and decreased slightly in the defense market.

CPI's net income in the third quarter totaled $1.2 million, as compared to $3.5 million in the same quarter of the prior year. The decrease in net income primarily resulted from lower sales and a less profitable mix of products, as well as a $4.0 million increase in income tax expense. Partially offsetting the decrease in income, CPI recorded no expenses related to debt restructuring in the most recent quarter; in comparison, in the third quarter of the prior year, CPI recorded $7.2 million in expenses in connection with the debt restructuring completed in April 2014.

In the first nine months of fiscal 2015, CPI's orders in the defense market decreased two percent to $135 million. Lower orders to support certain shipboard radar programs, including the Aegis radar systems, and a foreign airborne electronic countermeasures program contributed to the decrease, which was partially offset by an increase in orders for radomes to support an electronic warfare program and for products to support foreign naval radar systems. Demand for products to support the Aegis radar systems remains significantly stronger than long-term historical averages, but the timing of the placement of orders for these systems has resulted in unfavorable comparisons between the first nine months of fiscal 2015 and the same period of fiscal 2014.

In the third quarter of fiscal 2015, CPI's sales in the defense market were essentially unchanged at $45.6 million. Sales to support certain radar applications, including several cloud-profiling radar programs, increased, offsetting a decrease in sales to support a radar program that has fluctuating annual demand levels and an airborne electronic warfare program that has been completed.

In conjunction with this announcement, CPI will hold a conference call on Wednesday, August 12, 2015 at 11:00 a.m. (EDT) that will be broadcast simultaneously on the company's Web site. To participate in this conference call, please dial (800) 649-5127, or (253) 237-1144 for international callers, enter conference ID 85154808 and ask for the CPI International Third Quarter 2015 Financial Results Conference Call. To access the Web cast, please visit http://investor.cpii.com and click "Events." 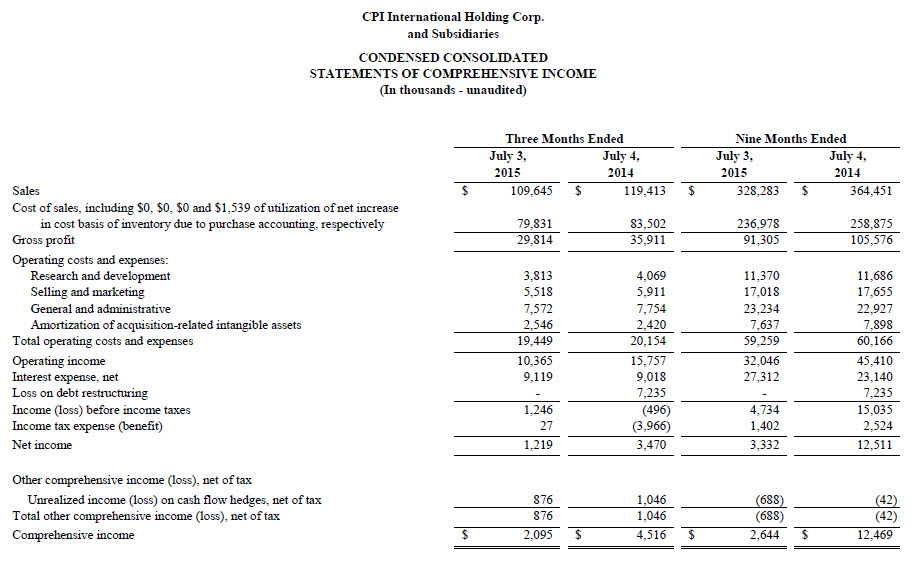 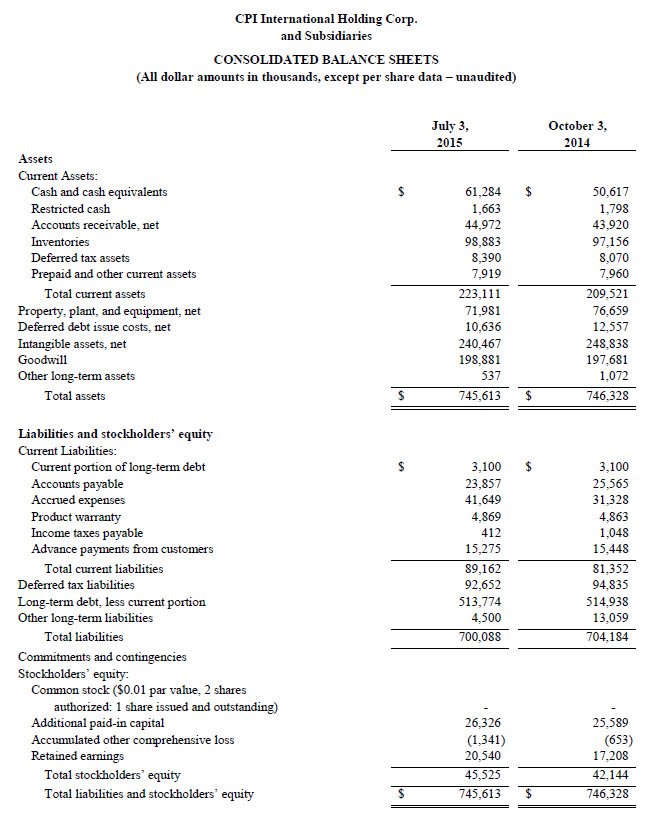 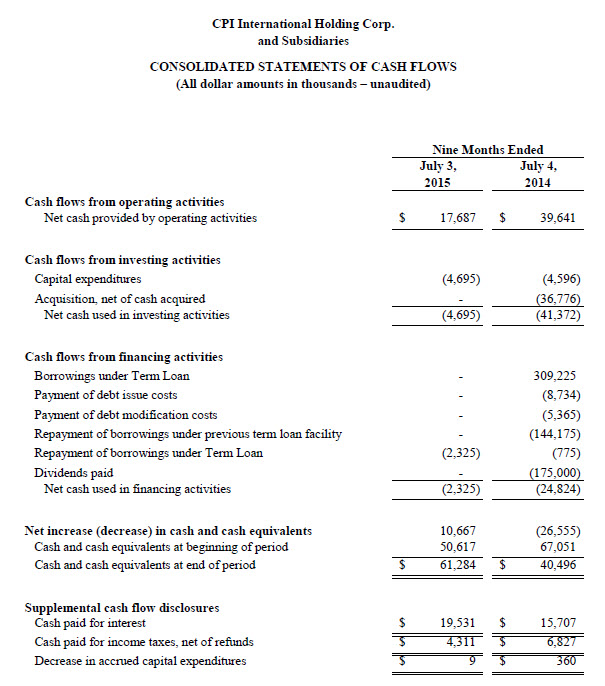 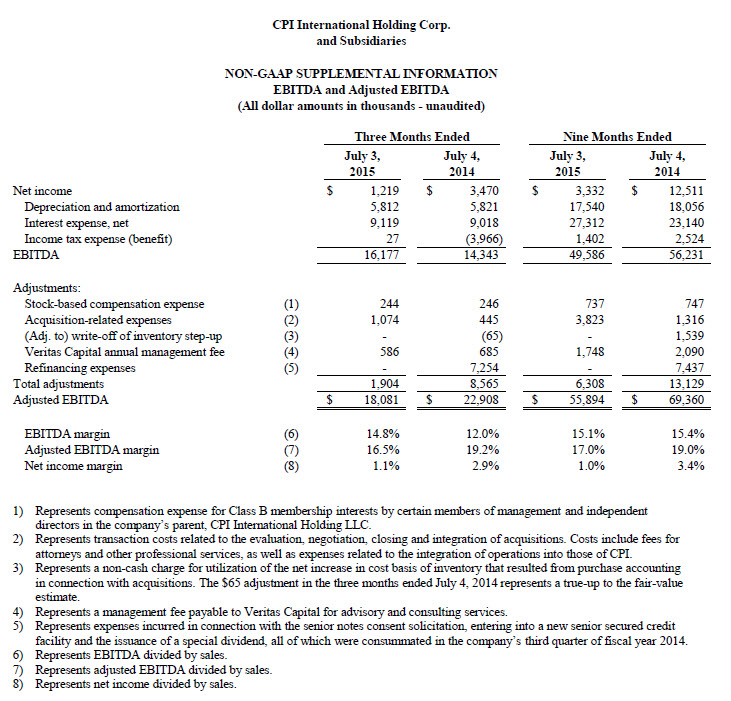 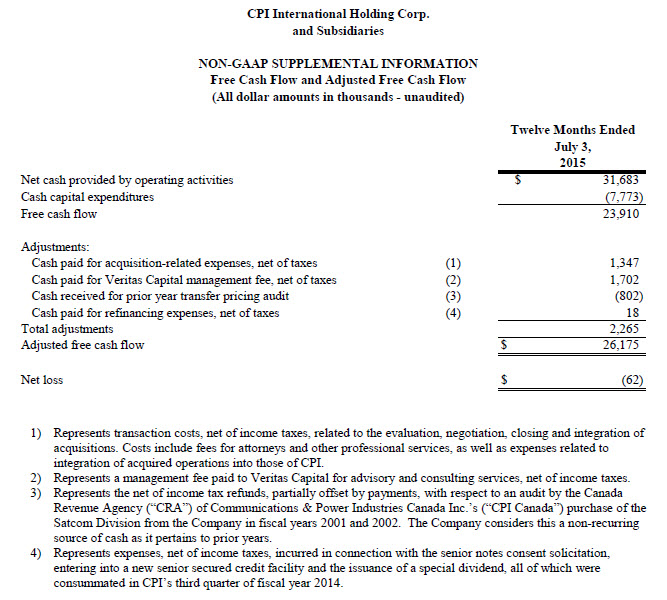