"Fiscal 2015 is progressing largely as anticipated. We are encountering expected delays in the placement of orders for some government programs, resulting in short-term softness in certain parts of our defense and communications businesses, partially offset by above-average demand for other defense programs. The current challenges are not unexpected, given the very strong orders year that we enjoyed in fiscal 2013 and the unusually strong sales year that we enjoyed in fiscal 2014, which were, in large part, due to the then-favorable timing of several significant defense and communications programs," said Joe Caldarelli, chief executive officer. "Nevertheless, the fundamental demand and long-term drivers of our business remain stable and encouraging. We are confident that CPI will continue to execute our plan for fiscal 2015 and that our business will continue to grow in the long-term as the currently delayed orders are ultimately placed and fulfilled."

CPI booked orders totaling $227 million in the first six months of fiscal 2015, a one percent decrease from the $229 million booked in the same period of the previous year. Orders decreased slightly in the defense market and increased in the communications and medical markets.

In the second quarter of fiscal 2015, CPI recorded a net loss of $0.9 million; in the same quarter of the prior year, the company generated net income of $5.9 million. The decrease in net income was primarily due to a less profitable mix of products and lower sales in the most recent quarter, as well as a $2.3 million increase in interest expense as a result of the debt refinancing transaction that CPI completed in April 2014. Lower income tax expense partially offset the decrease in income.

In the defense market, orders decreased three percent to $92.0 million in the first six months of fiscal 2015. This decrease was primarily due to the periodic timing of defense programs, which resulted in lower orders for electronic warfare programs and for Aegis radar systems.

CPI's defense market sales in the second quarter of fiscal 2015 totaled $43.0 million, decreasing eight percent from the same quarter of fiscal 2014. This decrease was primarily due to lower sales for a radar program that has fluctuating annual demand levels and for two programs that are completed or nearly completed. Partially offsetting this decrease, sales of radomes and sales of products for Aegis radar systems increased.

In the communications market, orders increased six percent to $76.4 million in the first six months of fiscal 2015. This increase was due to higher orders for certain military and commercial communications applications, particularly fixed-satellite services applications.

In the medical market, orders increased 10 percent to $45.4 million in the first six months of fiscal 2015. This increase was primarily the result of higher orders for MRI and x-ray imaging applications.

Sales in the medical market totaled $17.4 million in the second quarter of fiscal 2015, essentially unchanged from the same quarter of the prior year.

"After the extraordinary strength of fiscal 2014, we are not surprised that our business has been somewhat slower in the first half of fiscal 2015. We are expecting our business to pick up in the fourth quarter, and we continue to expect fiscal 2015 to be a successful year for CPI," said Caldarelli.

In conjunction with this announcement, CPI will hold a conference call on Wednesday, May 13, 2015, at 11:00 a.m. (EDT) that will be broadcast simultaneously on the company's Web site. To participate in this conference call, please dial (800) 649-5127, or (253) 237-1144 for international callers, enter conference ID 34812811 and ask for the CPI International Second Quarter 2015 Financial Results Conference Call. To access the Web cast, please visit http://investor.cpii.com and click "Events." 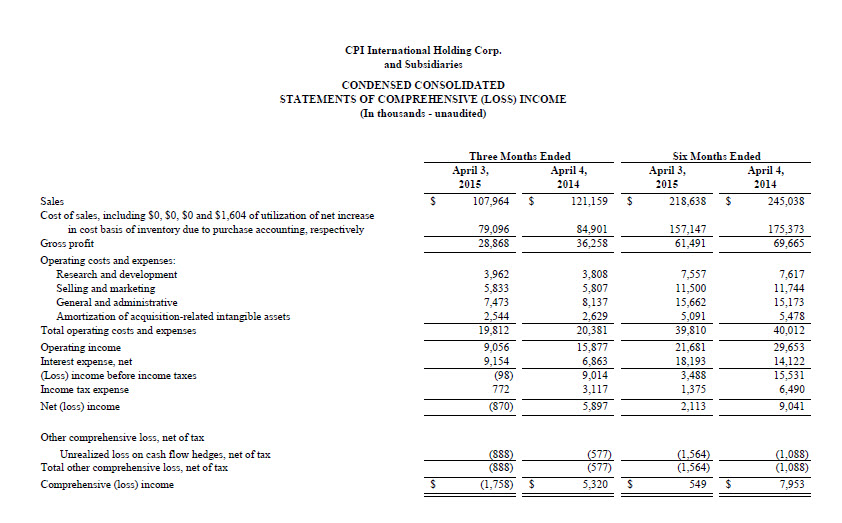 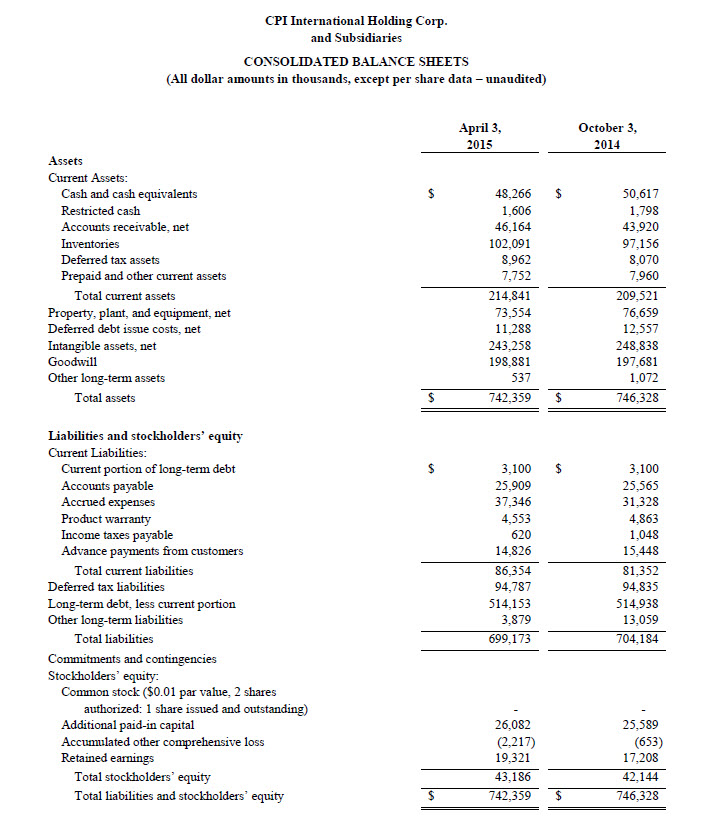 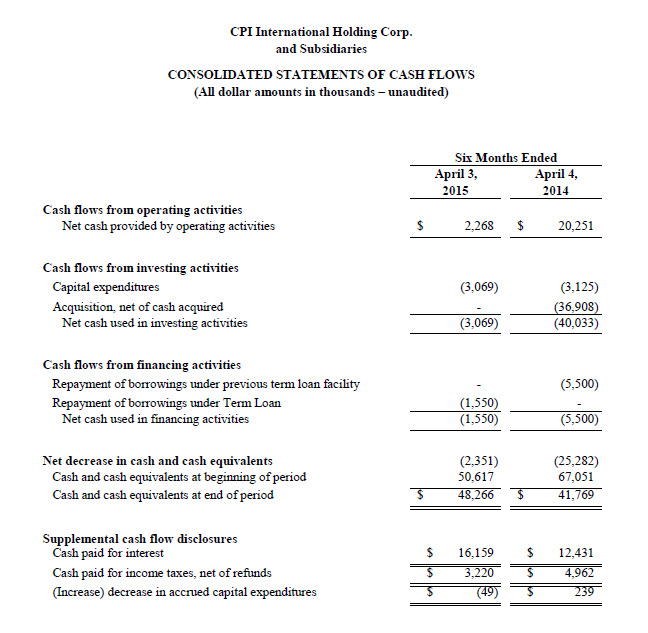 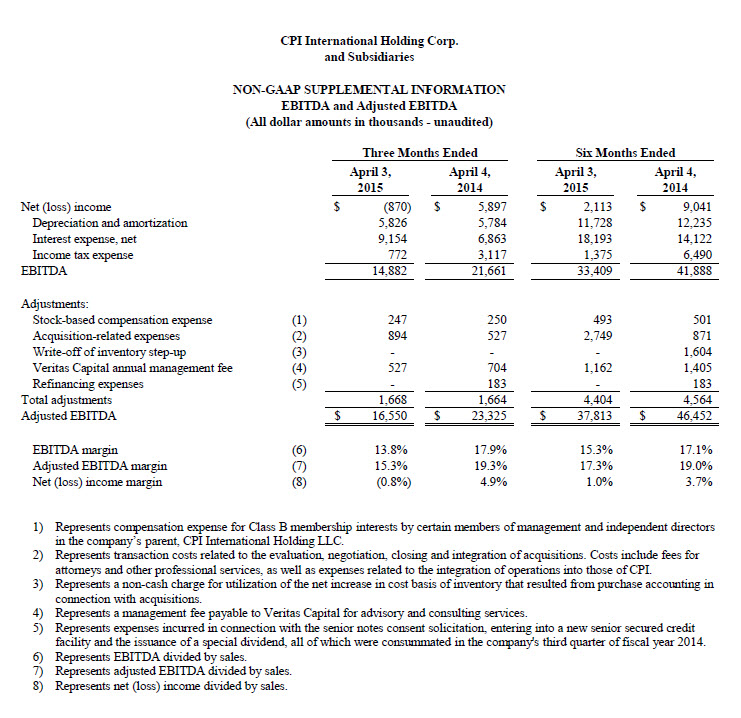 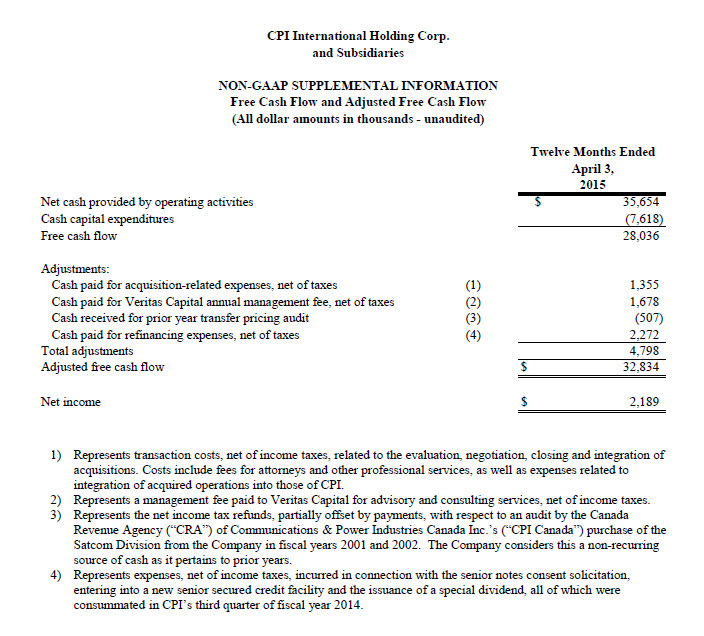