"On the heels of a very strong fiscal 2013, fiscal year 2014 is shaping up to be a financially successful year for CPI. Our defense market remains healthy due to significant backlog levels and recent orders. Our medical market is stable and is enjoying improved demand for x-ray imaging products, particularly in Asia," said Joe Caldarelli, chief executive officer of CPI. "In addition, the integration of the Radant Technologies business, which we acquired in October 2013, has progressed seamlessly, and together with our other recent acquisitions, the new Radant Technologies Division is making significant contributions to our product portfolio and financial results."

CPI recorded sales of $121 million in the second quarter of fiscal 2014, an increase of approximately 19 percent from the $102 million recorded in the same quarter of the prior year. Excluding the approximately $9 million in defense and communications sales generated by the recently acquired Radant Technologies business, CPI's total sales increased approximately nine percent.

In comparison to the same quarter of the previous year, in the second quarter of fiscal 2014, CPI's sales in its three largest markets were as follows:

In comparison to the same period of the previous year, in the first six months of fiscal 2014, CPI's orders in its three largest markets were as follows:

The increases in net income and adjusted EBITDA in the second quarter of fiscal 2014 were primarily due to higher total sales and a more profitable mix of products sold in the most recent quarter as compared to the year-ago quarter.

On April 7, 2014, CPI closed a refinancing transaction that included a new credit agreement, consisting of a $310 million term loan, due November 2017, and a $30 million revolving credit facility, due August 2017; if CPI repays or refinances at least 65 percent of its senior notes before August 2017, however, the term loan and revolving credit facility will mature in five and seven years, respectively. As part of the refinancing, the interest rate on CPI's senior notes increased from eight percent to 8.75 percent and the aggregate amount of CPI's permitted indebtedness increased. Borrowings on the term loan were used primarily to repay the $139 million outstanding under the company's previous credit agreement and to pay a dividend of $175 million to CPI International Holding Corp.'s sole stockholder, CPI International Holding LLC. The refinancing did not have a material impact on CPI's results in the second quarter of fiscal 2014 because the company entered into the new credit agreement at the start of its third quarter.

Excluding discrete tax adjustments, the effective tax rate for fiscal 2014 is expected to be approximately 38 percent.

In conjunction with this announcement, CPI will hold a conference call on Wednesday, May 14, 2014 at 11:00 a.m. (EDT) that simultaneously will be broadcast live over the Internet on the company's Web site. To participate in the conference call, please dial (800) 649-5127, or (253) 237-1144 for international callers, enter conference ID 36129762 and ask for the CPI International Second Quarter Fiscal 2014 Financial Results Conference Call. To access the call via the Internet, please visit http://investor.cpii.com and click "Events." 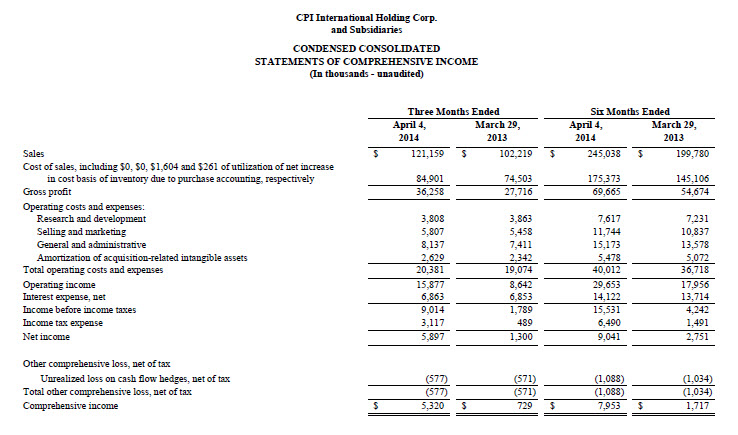