PALO ALTO, Calif. - February 12, 2014 - CPI International Holding Corp., the parent company of CPI International, Inc. (CPI), today announced financial results for its first quarter of fiscal year 2014 ended January 3, 2014. In comparison to the same quarter of the prior fiscal year, CPI increased its sales, backlog, net income and adjusted EBITDA in the first quarter of fiscal 2014. CPI's $124 million in sales set a new company record for quarterly sales and its $362 million in backlog was the highest first quarter backlog level in CPI's history, even after excluding sales and backlog contributions from the recently acquired Radant Technologies, Inc.

"CPI's strong financial performance in the first quarter shows a continuation of the market conditions and trends that drove robust operational and financial results in fiscal 2013. Our defense programs remain healthy, our communications applications continue to grow and our medical market is stable. Our recent acquisitions are performing well. In particular, the Radant Technologies business that we acquired at the beginning of fiscal 2014 made solid contributions to our orders, sales and profit during the quarter," said Joe Caldarelli, chief executive officer of CPI. CPI acquired Radant Technologies, Inc., which is now the CPI Radant Technologies Division, in October 2013.

In comparison to the same quarter of the previous year, CPI's sales in the first quarter of fiscal 2014 in its three largest end markets were as follows:

In comparison to the same quarter of the previous year, CPI's orders in the first quarter of fiscal 2014 in its three largest end markets were as follows:

CPI's net income totaled $3.1 million in the first quarter of fiscal 2014, an increase from the $1.5 million in net income reported in the same quarter of the prior year. This increase was primarily due to higher total sales in the most recent quarter.

"Fiscal 2014 is off to an excellent start for CPI. We will continue to be cognizant of external factors, such as global economic conditions and government budgets, that could impact market conditions, but we currently foresee no imminent perturbations to our near-term business and results," said Caldarelli.

CPI is reconfirming its previously issued financial guidance for fiscal 2014. The company continues to expect:

Excluding discrete tax adjustments, the effective tax rate for fiscal 2014 is expected to be approximately 38 percent.

In conjunction with this announcement, CPI will hold a conference call on Thursday, February 13, 2014 at 11:00 a.m. (EST) that simultaneously will be broadcast live over the Internet on the company's Web site. To participate in the conference call, please dial (800) 649-5127, or (253) 237-1144 for international callers, enter conference ID 43874745 and ask for the CPI International First Quarter Fiscal 2014 Financial Results Conference Call. To access the call via the Internet, please visit http://investor.cpii.com and click "Events." 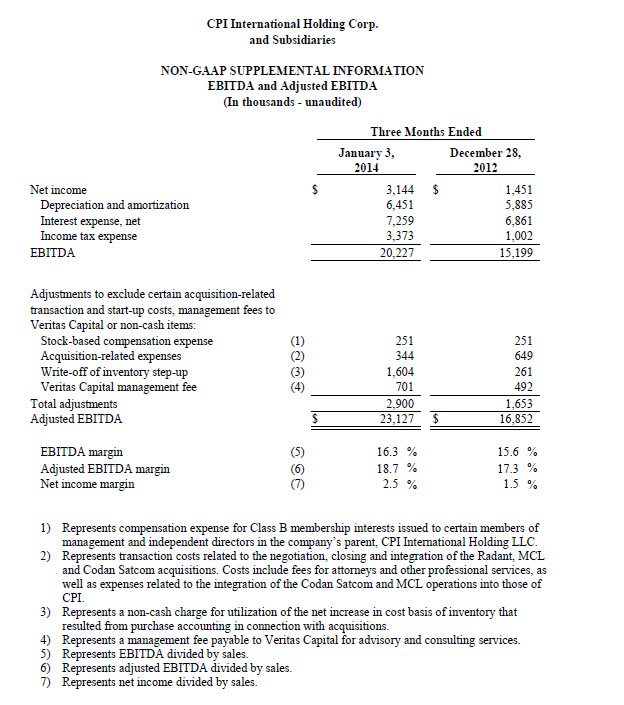 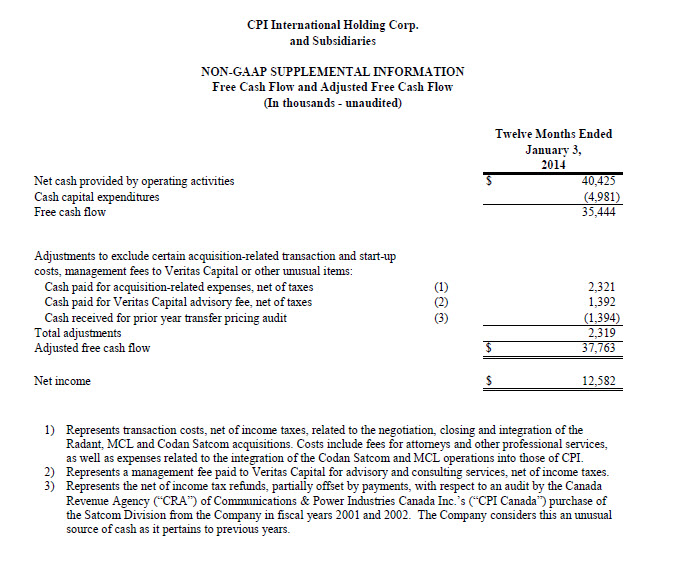