"For the past few years, discussions of our financial results have been dominated by programs that have been atypical for CPI, such as the large, one-time, counter-IED program in which we participated last year, the multi-year WIN-T military communications program and the unpredictable MRI business that has fluctuated significantly for several years," said Joe Caldarelli, chief executive officer. "Fiscal 2012 represents a renewed focus on a number of our long-term, recurring programs. These core programs continue to perform well and offer solid opportunities for CPI, due, in part, to improving economic conditions. In particular, our radar, commercial communications and x-ray imaging businesses have been strong in the first quarter and are expected to provide solid results throughout the year."

In the first quarter of fiscal 2012, CPI generated total sales of $93.0 million, which was a four percent increase from the $89.0 million in sales generated in the same quarter of the previous year.

CPI booked total orders of $97.6 million in the first quarter of fiscal 2012, resulting in a strong book-to-bill ratio of 1.05. In the same quarter of fiscal 2011, the company's $99.1 million in orders included $6.9 million for a one-time program, which was completed in fiscal 2011, for counter-improvised explosive device (counter-IED) products. Excluding this non-recurring program, orders for CPI's products increased six percent. As of December 30, 2011, the company had a robust order backlog of $252 million.

The first quarter of fiscal 2012 included significant increases in expenses resulting from the acquisition of CPI by Veritas Capital in February 2011, including, in comparison to the same quarter of the prior year, a $4.7 million increase in depreciation and amortization expenses and a $3.1 million increase in interest expenses due to the refinancing of the company in connection with the acquisition. In comparison, the first quarter of fiscal 2011 included $2.7 million in strategic alternative transaction expenses that did not recur in the most recent quarter. Primarily as a result of the increase in acquisition-related expenses, the company recorded net loss of $1.6 million as compared to net income of $2.2 million in the same quarter of the prior year.

As of December 30, 2011, CPI had cash and cash equivalents totaling $38.9 million. In the 12 months ending on that date, cash flow from operating activities totaled $6.5 million and free cash flow totaled negative $2.2 million. The negative free cash flow result was due to strategic alternative transaction expenses related to the acquisition. Adjusted free cash flow, which excludes certain payments related to the acquisition, among other items, was $11.0 million for the 12 months ending on December 30, 2011.

CPI is reconfirming the following previously issued guidance for fiscal 2012:

CPI believes its effective tax rate for fiscal 2012 will be approximately 39 percent.

In conjunction with this announcement, CPI will hold a conference call on Friday, February 10, 2012 at 11:00 a.m. (EST) that will be broadcast live simultaneously over the Internet on the company's Web site. To participate in the conference call, please dial (800) 649-5127, or (253) 237-1144 for international callers, enter conference ID 47307215 and ask for the CPI International First Quarter Fiscal 2012 Financial Results Conference Call. To access the call via the Internet, please visit http://investor.cpii.com and click "Events." 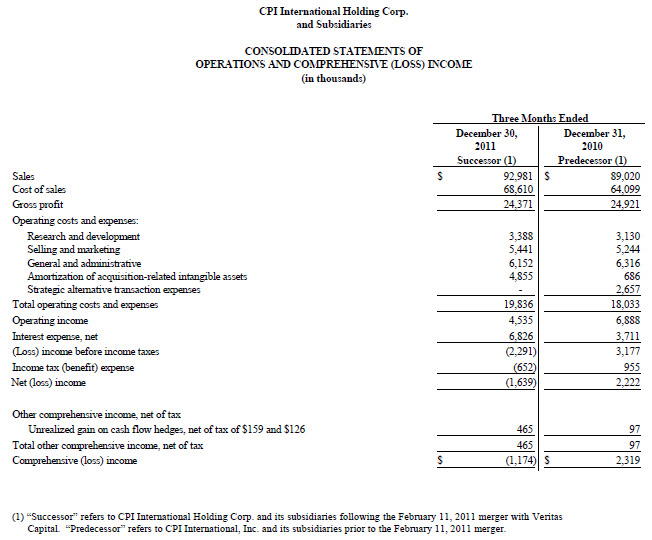 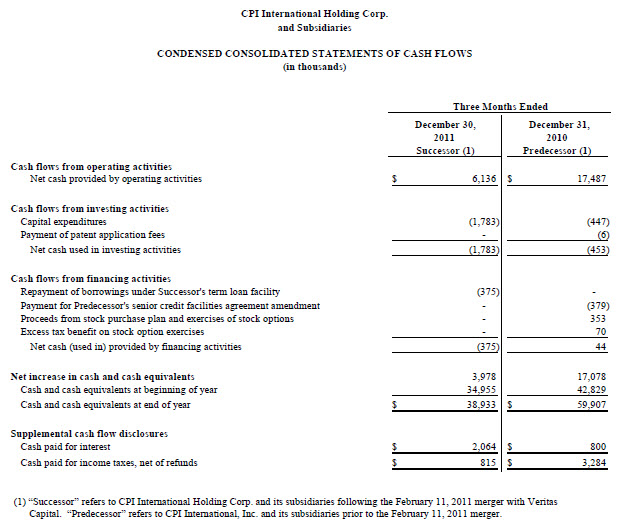